Puffer’s Pond Dam
The dam was originally made as a dry-laid structure so that water could weep through, and a larger 3’ x 3’ sluiceway was incorporated into the dam to lower the water level for inspection and cleaning, and to feed water into a pipe that powered mills downstream. This sluiceway is operated manually with a hand wheel located on a footbridge on the upstream side of the dam near the right abutment. Although the entire top of the dam acts as a spillway, there is a 50 feet section near the right abutment that is 6 inches lower than the remainder of the crest, allowing low levels of water to cascade down this side of the dam (Tighe and Bond 2008 Report).

In the 1970’s (1976-77) repairs were made to the dam, which included adding a concrete cap and an 8-inch thick concrete slab covering the upstream surface of the dam. 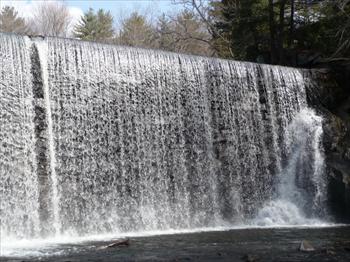 Ironically, Steve Puffer, whose family originally owned the stone dam, and the town engineer, Jim Smith, helped with these repairs. In 1991, the Town added the 36” sluiceway pipe by placing the pipe “inside an existing 48 outlet pipe with the annular void filled with concrete” (Tighe and Bond 2008 Report).

The structure, which has remained relatively unchanged except for these minor repairs, is approximately 112 feet in length with a maximum height of 32.5 feet in the spillway, and has a capacity of 223 acre-feet, with a normal storage of 80 acre feet [12 acres] (Findlakes.com/). The top of the dam varies between 4 and 6.5 feet wide and the entire structure acts as the spillway, meaning water can flow over any segment of the dam length (2008 Tighe and Bond Inspection Report). Located 140 feet northwest of the dam is an earthen dike separated from the dam by a large rock outcropping. The 10-foot wide dike has a height 3.2 feet higher than the dam spillway and an “analysis completed for the dam indicate that the dam is capable of passing 37% of the test flood before the dike would also be over-topped” (Tighe and Bond report 2008).

Dam Inspections
According to MGL Ch.253, Section 46:
“The owner of any dam shall cause to be filed with the commissioner, on or before January 1, 2004, and periodically thereafter, as required by regulation, in accordance with the hazard potential classification of the dam,… a dam inspection form, containing information relative to the present condition, safety and adequacy of the dam and such other information as the commissioner may require by regulation, signed by a registered professional civil engineer.”

The Department of Conservation and Recreation’s Office of Dam Safety oversees MGL relating to dam safety and inspection. The dam at Puffer’s Pond, due to its height, location of residences and structures (Mill Street bridge is approximately 125 feet downstream from the dam and would sustain heavy damage if a big flood event) downstream, and type of construction, is considered a high hazard potential. . . . Due to this rating, the dam must be visually inspected every 2 years, which involves the completion of a Phase I Inspection/Evaluation Report by a certified civil engineer.

As a high hazard, Amherst must maintain an Emergency Action Plan “to safeguard the lives and reduce damage to the property of the citizens of Amherst living in the vicinity of Factory Hollow Pond in the event of failure of the Factory Hollow Pond Dam” (Emergency Action Plan, Tighe and Bond). Amherst typically contracts Tighe & Bond of Westfield, Massachusetts, to perform the inspections and assessment in accordance with M.G.L. Chapter 253 Sections 44-50 as amended by Chapter 330 of the Acts of 2002.

The conditions of the dam in 2008 did not differ much from the previous inspection in 2006 “with the exception of increased seepage at the right abutment and around the 36 inch outlet pipe” (Executive Summary, Tighe and Bond).
[]